10 Unforgettable Things To Do in Porto, Portugal

10 Memorable Things To Do In Porto, Portugal

Porto is the northern capital of Portugal. It is a special city with a unique atmosphere and amazing architecture. Our list of ten things to do in Porto includes walking the alleys of the old town, seeing all of the most interesting buildings, and tasting port wine.  Let’s get started on our journey to 10 awesome things to see and do in Porto!

What’s the best way to introduce you to a new place if not the cuisine? In the case of Porto, of course, port wine comes first. In any café or store, you will find this great drink. Go to the Porto and Douro Wine Institute (there is one!) and you’ll be offered many different kinds of port wine, including the most aged, several decades old.

But it is better not to go to the Port Wine Museum – they will not show you anything interesting and they will not offer you to drink some port wine. Once on the other side of the Douro River, you will see a bunch of wine cellars where different brands of port wine are stored.

Do not be afraid to look inside, they will gladly take you on a tour, tell you about the process of port wine production, and give you a taste. In principle, it does not matter which of the cellars you look in – it will be interesting and delicious everywhere.

The question of what to drink port wine with has also been resolved long ago in Porto. Francesinha is a local dish. Excellent both in its taste and in its practicality. The dish consists of a couple of toasts, steak, Portuguese sausages, and bacon. The whole thing is baked under cheese, poured with an insanely delicious sauce based on brandy and port wine, and garnished with a fried egg on top.

Go a Little Higher For an Amazing View

Every port city has a building that served as a landmark for sailors returning home from long voyages. In Porto, it is the Torre dos Clérigos, the tallest church tower in Portugal. 76 meters isn’t much, but it’s enough to become tired climbing the stairs and to be terrified of heights when you reach the top, and then observe a breathtaking view.

If you have already ended up in Portugal, then you are already used to azulejos, local drawings on tiles. And the only thing that might make you say “wow” is a visit to the São Bento Station. You will not find such azulejos anywhere else! It seems you can trace the entire history of the city and country by them. The acoustics in this place is striking. It seems to be the station, but there is no train noise. Or you just don’t notice it because you’re standing there with your mouth open. 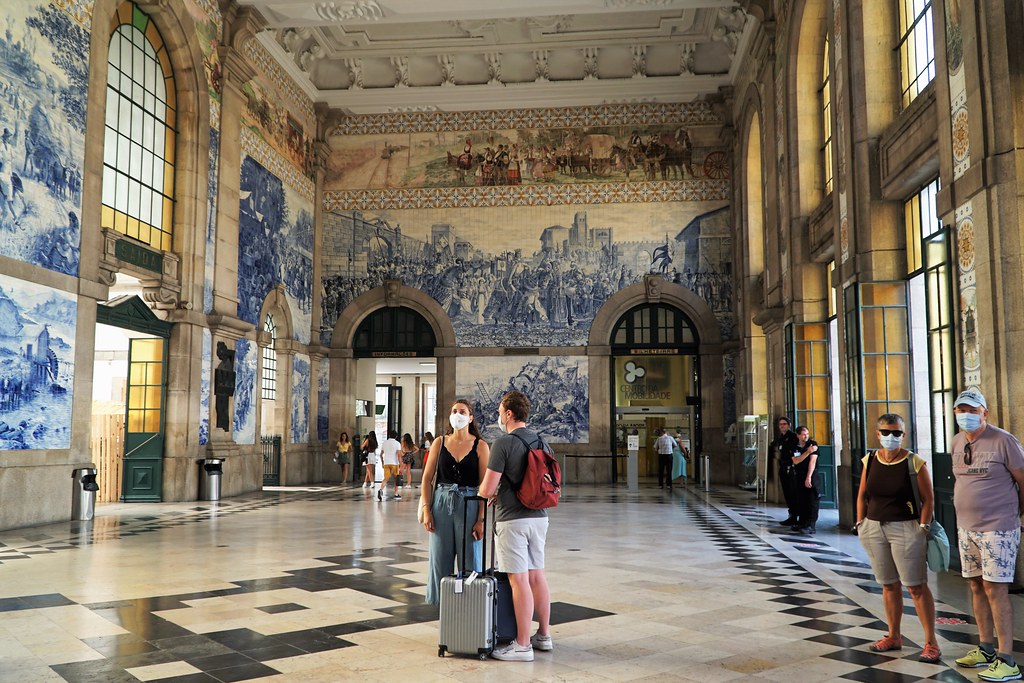 Walk Across the Bridge

Porto’s most prominent architectural distinction is the bridge Ponte Luís I. Large, monumental, it resembles the Eiffel Tower lying on its side. And no wonder – it was built by one of Gustave Eiffel’s students. Be sure to go both along the top of it, from where you can see the whole world, and along the bottom, where you can focus on a detailed examination of the Ribeira area.

Be Amazed at the Pile of Houses

By the way, about Ribeira. Multicolored houses, stacked on top of each other in five, ten rows, it seems, will never end. It was like someone was playing Tetris here and couldn’t win. Walk from the Ponte Luís I to one side, then to the other side, return back. Take time to listen to street musicians, both fiddlers in tuxedos and Rastamen with dreadlocks.

Go to One of the Most Beautiful Bookstores in the World

Livraria Lello is one of the oldest bookstores in Portugal and one of the most beautiful in the world. The store exists since the end of the XIX century. In 1906 for it was designed building in neo-Gothic style, where the store operates to this day. The interiors seem to have left the pages of fairy tales: stained glass windows, red carpets, carved wood, and a curved staircase.

It is no coincidence that Joan Rowling was inspired by Livraria Lello when she wrote Harry Potter, and some scenes of the film were shot here. There is a fee to enter the store, but the price of the ticket counts if you make a purchase. You should come by the opening – the store is very popular with tourists.

Listen to a Concert

Well, or at least just look at the Casa da Musica. The modern, unusual building contrasts with the old city and certainly attracts attention. The Casa da Musica was designed by the architect Rem Koolhaas and has received international fame. You can find yourself inside not only by buying a ticket for the concert but also by taking an excursion. In addition, the interiors are visible from the street through large windows.

Porto is a small town by European standards, with a population of only 220 thousand people. And yet in this city plays one of the best football teams in Europe, which more than once won the Champions League. Of course, the team is respected and loved in this city, and you won’t find a street that doesn’t have the flags of the Porto football club. Be sure to visit the Estádio do Dragão, where Porto hosts its opponents and where as much as a quarter of the city can fit in!https://flic.kr/p/2eU7cNZ

A large and monumental tram museum awaits you on the bank of the Douro River. There are dozens of trams from different years in the museum, and you can see how trams have changed over time. It is important to note that there are not only Portuguese trams but also trams from the Czech Republic, the United States, England, and Italy. Answering the questions, yes, it is possible to enter the cabin.

Do Some Food Shopping

You don’t need to look for shops with cheeses and sausages on purpose. They’ll track you down on their own. You won’t be able to ignore the enticing smell of jamón behind the windows. The impression is that the blacker the sausage in Porto, the tastier it is. It is not clear what they put there (prunes are guessed, the rest is doubtful), but it is very tasty and goes just fine with the port wine. Also, be sure to try sheep milk cheese with a liquid center – you cut off the top cheese crust with a knife and eat the cheese with a spoon.